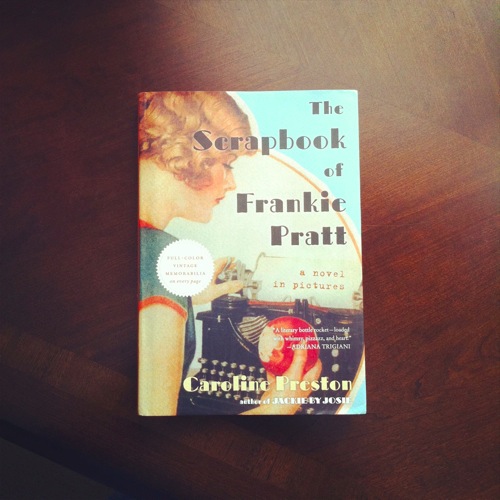 I think each of us has an inner packrat. Whatever the object – say, hypothetically, it’s an empty lighter from a Vegas casino where you celebrated your first wedding anniversary (I digress) – whatever the object, we tend to invest items with emotional significance because of the memories associated with the object. Just by looking at the item, we can go back in time. And we remember.

It’s this feeling of reminiscence that Caroline Preston captures superbly in her latest novel, The Scrapbook of Frankie Pratt: a Novel in Pictures (ECCO/HarperCollins Publishers; ISBN 13: 9780061966903; $25.99; Hardcover; 240 pages; Release: October 25, 2011). The novel tells the story of its eponymous heroine Frankie Pratt, tracking her life from a modest, New Hampshire farmhouse to the City of Light and the Left Bank. Along the way, readers encounter Frankie’s various romantic interests, a host of literary luminaries, and Frankie’s witty impressions of the “whiz-bang” years of the 1920s.

The story is interesting in its own right with plenty of twists. But what makes Ms. Preston’s novel really standout is the telling. Rather than following a conventional novel form, one void of pictures and so often void of talent, The Scrapbook of Frankie Pratt is an actual scrapbook built “item by item” from vintage 1920s memorabilia.

The effort was obviously painstaking. Preston notes spending “countless hours” to amass the 600-item collection of 1920s ephemera required to tell Frankie’s story. This lends the tale an appreciable degree of authenticity, with every detail of Frankie’s life requiring a genuine period piece. The range of items is impressive, from a first-edition dust jacket of The Sun Also Rises, to the 1915 Corona typewriter used for the captions of the book. The end result is a 240-page novel comprised of full-color photographs of the scrapbook built by Caroline Preston. For bibliophiles, this means a new type of novel that readers can not only read, but experience in a concrete, visceral way.

One criticism I expect the book will receive is that scrapbooking itself is an anachronism, a hobby lost in the digital age not unlike stamp collecting and the U.S. Postal Service itself. But even while the story is told in a very specific way, and set in a very famous moment in time, the larger theme driving Preston’s novel is one that every sentient person can relate to: memories.

At its core, scrapbooking is about preserving memories by compiling a personal history derived from objects that people ascribe significance to. While Preston communicates this preservation in the form of a novel, the concept of memory has a lengthy scholarly history. One quick example can be found in the unlikely source of German philosopher Friedrich Nietzsche. In his 1874 essay, On the Uses and Disadvantages of History for Life, Nietzsche muses about the the role of history, and its implications for those sad souls doomed to live in the present. His conclusion of the matter is that “the unhistorical and the historical are necessary in equal measure for the health of an individual, of a people and of a culture.” The implication is that dwelling too much in the past, can inhibit human proclivities for progress, while living hedonistically in the present without regard to the lessons of history can lead to a vacuous existence full of narrow-mindedness and selfishness.

Nietzsche’s observation is something we tend to internalize intuitively as a species. We give objects significance because they remind us of a special moment, or because they mark an important occasion. In this way, we tend to balance our ‘living in the now’ with memories and lessons from the past. What Caroline Preston does in The Scrapbook of Frankie Pratt is explore this tendency to preserve memories on a personal level through the lost art of scrapbooking.

In truth, scrapbooking itself isn’t all the foreign a concept either. When I was a young child, my sister and I took a trip across the American west with our grandparents. From the backseat of a late-80s, Ford Crown Victoria, the four of us visited nearly every American landmark that mattered. We made stops at Petrified Forrest National Park, an honest-to-God forrest of petrified wood; a massive meteor crater that would easily swallow our hometown; the Mesa Verde cliff dwellings; and Grand Canyon National Park. On the way home, we stopped at Toys ‘R Us in Amarillo, TX, before hopping the highway for a stake at the Big Texan Steakhouse.

From each stop, we gathered a small library of brochures, park guides, ticket stubs, and receipts.  And when we weren’t pestering our grandparents with questions, my sister and I managed to take enough cheesy photographs to make the other tourists blush. Tucked away in the Fodder family annals is a photo of my sister getting in trouble for trying to swipe a large stump of petrified wood, and a snapshot of me awkwardly lying down in four states at once.

Five years later, Grandma would pass away. Though we had resolved to take another trip west, the stars didn’t align for us to make the trek again. But even after all of these years, that three-week trip was one of my best memories of growing up. Whenever I look at the old shoe box of memorabilia from the trip, I’m instantly taken back to the long hours spent in the backseat of my grandparents Crown Vic, staring at the rolling desert as we made our way west.

My items rest in a dusty shoe box, but the transition from storage to scrapbook is fairly easy to envision after having read The Scrapbook of Frankie Pratt. And quite literally every person could do something similar.

In this way, far from being an anachronism, The Scrapbook of Frankie Pratt captures something we can all relate to. We all have our own coming of age memories. We can all recall having taken a trip to some place special. And we can all think of objects that we have imbued with significance, either because they remind us of our youth, or because they remind us of a unique event.

Memory is simply the collective human experience. Caroline Preston understands this, and manages to bring memory to life in The Scrapbook of Frankie Pratt.

It’s a drop past 11AM here in Taos Pueblo. The temperature has languidly paced it’s way into the 50s. A cool breeze makes its way beneath the carport here at my Grandmother’s house.

It’s mid-October, but wood stoves burn in the distance, and the smells of piñon waft through the air as it has done for centuries in this ancient, mysterious place.

There’s a shed across the dirt driveway. It is filled to the top of its 9-ft tall ceiling with enough wood to last two winters. I suppose the excess is important during the cold winter to come. But I’ve never seen the wood shed at less than capacity during any season.

In most respects, Taos is a full-throttled embrace of the historical. This disposition allows for language and tradition to coexist alongside the western/anglicized City of Taos less than a mile away.

Naturally, this makes a balance with the unhistorical nearly impossible, as Nietzsche would say. Living in the moment, living for self, and the now are supreme challenges for Taos Pueblo and its denizens. Western arts, culture, and technology (aside from the ubiquitous Chevy trucks) are scarce on the reservation.

Yet, as the leaves rustle, marking the passage of time, it’s a comfort to know that places like Taos still exist. Off the grid. A shrine to history.

A place where time stands still. 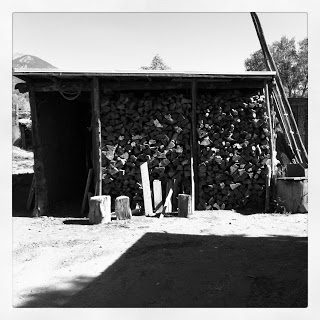