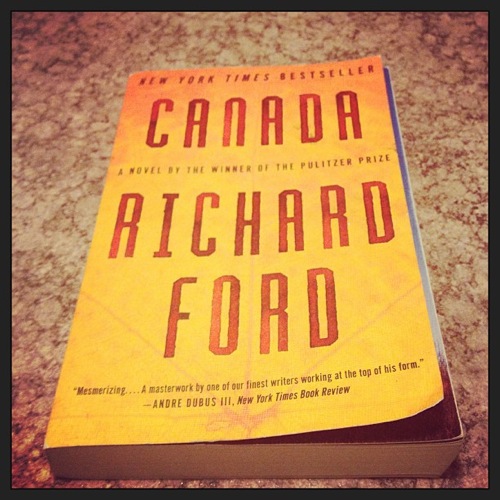 Richard Ford’s Canada (Publisher: Ecco; On Sale: Jan. 22, 2013; Cost: $10.67) made its way to me upon the release of the paperback version in late January. The press release described the work as a “suspenseful story of misadventure and malevolence that explores large themes of identity, culpability, and the ineluctable bonds that tie us to the past.” After a double check of the word ineluctable (viz., unavoidable), I can’t say that I entirely agree with the characterization.

Ford’s novel is fundamentally about families and choices. Granted, the family in this particular story is highly dysfunctional, dark and, in many respect, morbid. Then again, so are most families. But actual malevolence factors into the tale only tangentially.

The story tracks the life of Dell Parsons a high school-age boy with a twin sister named Berner. The two are an eclectic mix of ethnicities for the 1960s, born to a Jewish mother and a “Scotch-Irish, Alabama backwoods,” Air Force veteran, father. Ford develops these disparate origins quite well in Dell’s telling of his life’s story. The mother is described as an intellectual with somewhat romantic dreams of self-betterment, while the father is described as having all charm and no commonsense – in other words, a prime candidate for elected office in today’s America.

But the story occurs in the 1960s and times are hard in Great Falls, Montana. Obviously, the life choices the parents will make set the story on an ineluctable path toward familial disintegration. But what makes the story unique is the perspective of choice it takes as events unfold. The American dream, at least in a libertarian sense, envisions individuals possessing the freedom to make choices in life so that they can further their lot as an individual. One telling of the dream might include a person rising from modest origins, making good decisions that lead him to enter into a successful career of some sort. But what makes Ford’s story about choices unique is that he explores, in depth, the ramifications of individuals making poor choices, and how these choices shape the course of events for the next generations – in this case Dell and his sister Berner.

The dust jacket reveals that Dell’s parents will ultimately rob a bank. So, sharing this bit of information will not give away a major part of the plot that a reader would not have otherwise known. But even more interesting than the robbery is the psychology that informs the parents’ decision-making. Ultimately, the process is as much tragic as it is comic: two perfectly reasonable people decide that the best way to mitigate their present difficulties is to rob a bank. The conclusion is inexplicable, and one might be tempted to criticize Ford for being overly dramatic – that is until the multitude of stupid decisions that people make on a daily basis are also considered. American prisons are full of people who made bad decisions along the way – and that merely represents the percentage of people who were caught and held accountable for their actions.

In this way, Ford’s book is truly unique. It challenges Americans, in particular, to think about the faith we have in our perceptions of the American dream and whether human nature actually allows us to make the good decisions that the American dream depends on. Of course, the title of the novel is no mistake either. Only a novelist as clever as Ford would use our understated neighbors to the North to critique America’s understanding of itself.

Of course, much more happens after the parents bank robbery, including an incident of incest and the separation of the twins as an indication of the very different life choices they would make. Dell winds up in Canada living with a suspect in a decades old murder back in Michigan, while Berner heads off for the urban temptations of San Francisco. Perhaps demonstrating a bit of wisdom, the story follows Dell and his life in the wilds of Saskatchewan, including his squalid living conditions and the shock of having no one in his life who really cares.

But in honesty this reads like Ford’s attempt to bring some catharsis to the story, rather than an elemental aspect of the novel itself. It’s interesting, but not essential. Really, parts two and three read like a different novel entirely. Ford’s admittedly minimalist prose remains but the novel loses some of Dell’s introspection. The writing alone will be enough to keep readers turning to the end. But the meat of the novel is all in part one.

Ford’s novel isn’t a beach read. In fact, I wonder whether the novel will generate much of a popular following at all. As a culture we tend not to reward talents which make us confront realities and perceptions we find uncomfortable. Of course, Ford’s work causes us to question the very essence of American exceptionalism and opportunity, so it is fair to say the book creates questions that some might find irreverent, if not nationalistically blasphemous. And because of this intrepidity, I suspect Canada will help to further solidify Richard Ford’s reputation as a serious, thoughtful novelist – assuming his Pulitzer Prize didn’t already have the same effect.

In ye olden days of Mother Russia, Muscovites self-medicated away their nihilism with a bit of vodka and a trusty revolver. According to Alexander Snegirev’s latest novel Petroleum Venus (Publisher: Glas Publishing; On Sale: 5 Feb. 2013; Cost: $15.00), this has progressed to relentlessly mocking one’s Down syndrome child until feelings of parental fidelity bloom afresh.

The novel traces the life of Fyodor Ovchinnikov, a high-flying architect who is bound for the beaches of Miami when his life is upended by his parents’ untimely demise. Their sudden death leaves Fyodor to care for the teenage son that he abandoned long ago. For anyone curious as to Fyodor’s moral dilemma regarding his son Vanya, Fyodor helpfully shares his deepest contradictions quite early on in the novel’s pages:

I was totally confused: torn by love for my son, but hating him because he’d spoiled my life at the very outset. p.24

Seems rather forthright. But for those in search of greater depth to Fyodor’s character, Snegirev tends more toward candor than intellectual variances. The statement above sums up the entirety of Fyodor’s inner conflict – one that is somehow stretched for another 180+ pages.

To give Russia’s Debut Prize winner a bit more credit, Snegirev’s forthrightness actually comes across as an attempt at brutal honesty rather than a latent effort to make Fyodor’s character seem deliberately like a jerk. But given how predictable the plot is, the theme of honesty is really so overt as to be off-putting. Another example of Snegirev’s gratuitous attempt at shock value comes later in the novel where Fyodor’s love interest Sonya (could she be named anything else?) has a meeting with a client that is ruined by Vanya when he corrects the client’s description of him as a “retard.”

When the meeting implodes, Sonya berates Fyodor and Vanya:

SPOILER ALERT: Of course, Fyodor’s response to the outburst is to love Vanya all the more. But the emotional and intellectual transition in Fyodor’s character from “hating him” [Vanya] to loving him is too abrupt to seem feasible. Yet the schtick is reintroduced time and time again for the better part of the entire book – that is until Snegirev mercifully kills off Vanya’s character in the end.

Assuming my premonitions above are unpersuasive, know that on the plus side, the book is a quick read. Where his characters lack depth and his themes lack development, Snegirev’s writing eases the pain by taking readers between hither and yon at a swift pace.

Alas, that’s still two hours of my life that I’ll never get back.

This afternoon I ambled about town and visited The Base – a large indoor/outdoor shopping centre rumored to be New Zealand’s largest. I’m not sure about the rumors, but I was pleased to happen across something that reminded me of home.

Whilst on the hunt for a new backpack I spotted one of America’s finest exports, a Dunkin Donuts smack in the middle of the mall. I quickly shared my excitement with the manager, much to her surprise. Apparently, most people don’t get quite as excited as I do while happening upon a local D&D.

As I bit into my strawberry frosted doughnut, I swear that I tasted the sweet taste of freedom itself. Somewhere in America, a bald eagle soared a little higher.

And when I sipped my hazelnut coffee, made with one cream and two sugars just like God intended, well, it was enough to bring a tear to the eye. I promptly said a silent prayer of thanks and thought twice about singing The Star-Spangled Banner to the crowd.

Instead, I did the next best thing. I read some of Ayn Rand’s reflections on capitalism before happily proceeding to apply the lessons I had learned.

On the way home, I thought about the invisible hand of the market, and about the aspiration of free trade. And I smiled contentedly for the first time in many days.

Yes, friends. Capitalism is alive and well here in New Zealand and American exports are still making their way into the global market.

– Posted using BlogPress from my iPhone