I drove home from work on Friday. It had been a productive day.

I had had meetings with our project team, wrapping up a major initiative that our Institute puts on every year. The feedback was helpful. To a person, we were all very pleased with how the initiative turned out, particularly given the vexing circumstances and truncated timeline that had precipitated its beginning.

In the words of the ignoble Charlie Sheen, we were “#winning.” And we were all enjoying the moment of a job well-done. Rightly so. We deserved it.

Fast forward to the end of the day.

As the desert sun set over Tucson, I drove home, windows down, blaring Sinatra’s Nothing but the Best from my Ford Escape. True I wasn’t nearly as badass as the suped-up Tahoe next to me, which blasted Migos’s Bad and Boujee. But being neither bad nor a member of the bourgeois, I simply didn’t care. It had been a great day, and I was of a mind to head directly over to the store, in true bourgeois fashion, and pick up a few treats for my dog – which I did. #FirstWorldProblems.

As Sinatra sang of bull fights in sunny old Spain, a smile graced my lips for the first time in weeks. Damn straight, Frank. The month of January had been hell. Friday was payday. From here on out, Nothing but the Best.

Understand, however, that my version of ’the best’ may be a bit different than most. Mine started off at the local Walmart off of Wetmore here in Tucson. It’s an unprepossessing place. Its denizens are of the sort that would be ripe for cameo appearances on the “People of Walmart” website. (Note: I would make contributions to the site, the locale is that ripe for humor. But for all I know, I may well end up on the site myself one day, so why tempt the fates?)

Regardless, I joined my betters and wandered through cramped aisles, narrowly avoiding the carts and electric wheel chairs of the Walmart vanguard. Before long, I found all of the essentials for my little dog – a new crate, a new bed, and a box of treats as a reward for just how good he had been all week.

For the record, since my last post, not only did Nigel have zero accidents in the house (and zero incidents of destruction), but he also let me know every time that he needed to go out. Often, this amounted to jumping on the bed and kissing me awake at 6am (ALWAYS 6am – Every. Single. Day.). But I welcomed this outcome, as opposed to the times when he felt that he had no choice, but to soil his doggy bed rather than soiling the apartment. (Apologies if you have a weak stomach. No trigger warnings for you on this slice of the web.)

Ebullient, I drove home. So pleased to reward my little dog. It had been touch and go, but perhaps we had turned a corner. Leaving my wares in the car, I bounded up the steps, unlocked the door, and went in to check on my Nigel.

He had an accident in his crate again. But his eyes were so overjoyed to see me. It looked as if he might burst from happiness. It was a magnificent reunion. While I struggled to unlock his crate, I saw a yellow stream of urine flow from between his legs as his body shook with excitement to see me.

And my heart fell.

After taking him down, to do his business, I cleaned up the old crate, before promptly folding it up and throwing it in the trash. I would never leave him crated like that again. It was cruel. All while I did my work, he lay on the floor looking at me. 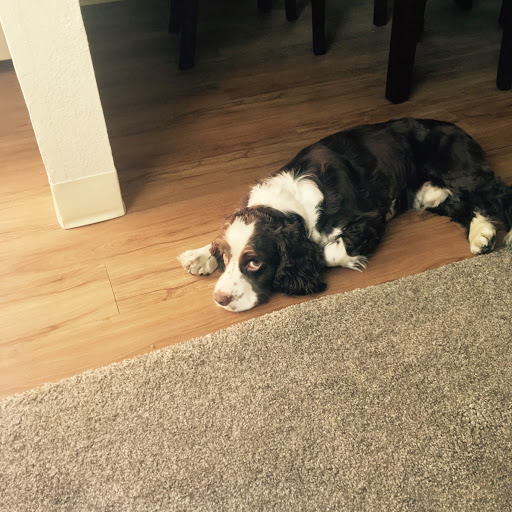 It’s a strange thing to realize that one is wholly inadequate. That no matter the best of intentions, it will never be enough to meet the need/s of another. Such was my Friday night realization with Nigel – what he needed, I would never be in a position to give him:

In my rationale, there was simply nothing that I could do to meet his needs, while also maintaining enough scratch to meet my own.

Except, that I could find him a new home. And so I did.

The internet is remarkably adept at facilitating pet adoptions. Within 14 hours, I had placed Nigel in a home with a large family, where everyone is home at some point during the day. They have two other Cocker Spaniels to keep Nigel company. And Nigel’s new home is much bigger than the two bedroom space I’m renting here in Tucson.

It was the right call. But it certainly wasn’t easy.

Sitting here now, in the quiet of my apartment, I’m torn. Rationally, I understand that what I did was in the best interest of everyone involved. And yet, I can’t help but feel like I’ve failed Nigel. That I’ve followed the status quo and took the easy way out. On the other hand, I think about Nigel’s shaking after a day in the crate. His joy and relief (literally and figuratively) at being let out – and it somehow, seems cruel to keep him in such dire straits.

At any rate, the transition is done on my end. It’s only beginning for his new family – though they are well acquainted with the breed, and with the quirks of Cocker Spaniels in general.

Here’s wishing them my very best. And here’s hoping that my existential dilemma will have no bearing on their very practical efforts to take good care of my little dog.