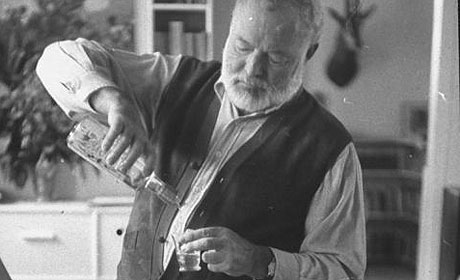 Fifty years ago today, legendary author Ernest Hemingway committed suicide in a quiet, central-Idaho hamlet. The incident marked an all but perfunctory end to a most remarkable life.

Hemingway’s memoirs from Paris, for example, published posthumously in 1964, present tales of a poor, American ex-pat living in the City of Light, calling upon historical luminaries such as Gertrude Stein (p.11), Sylvia Beach (p.35), and F. Scott Fitzgerald (p.179).

Assuming elbow rubbing with people of consequence is not enough to actually make one interesting, Hemingway also fought in both world wars, fished for Marlin in the Caribbean, and hunted grizzly bear in Wyoming. He famously survived one plane crash, three divorces, and still managed to produce seven novels during his lifetime.

Suffice it to say, Hemingway’s life was enough to make the Dos Equis man look passé. Stay thirsty my friends.

But the most compelling thing about Hemingway’s memories of Paris, and indeed of his writing generally, was his ability to recount the mundane. At the end of A Movable Feast, Hemingway paid a final tribute to his favorite city. What follows is the final paragraph of the book in full:

There is never any ending to Paris and the memory of each person who has lived in it differs from that of any other. We always returned to it no matter who we were or how it was changed or with what difficulties, or ease, it could be reached. Paris was always worth it and you received return for whatever you brought to it. But this is how Paris was in the early days when we were very poor and very happy. (p.211)

To observe the anniversary of Hemingway’s death, Wired.com ran a piece by author Marty Beckerman, exploring what Hemingway would think of our digital age.

Unsurprisingly, Beckerman’s take is that Hemingway would not think much of the world we’ve created.

Today, many of us have become rich in the currency of cowardice. We have so many things and so few experiences. We are desperate to live as long as possible, not as large as possible. We are so afraid to say goodbye to the world that we never say hello.

We are numbed in our high-def, Wi-Fi cocoons, eager for materialistic possessions — the newest, fastest, shiniest gadgets — instead of a fitting end to a life well-lived. If Papa hadn’t killed himself out of despair in 1961, he would kill himself out of disgust today.

The article is intentionally jarring, and outlandishly funny. But it’s also true.

Whether due to our technological prowess, or our penchant for comfort, mankind as a lot really isn’t as interesting as our forbearers. Beckerman mocks our affinity for Twitter, and Facebook, but it’s a sad fact that much of my day is spent checking both sites and wondering who is doing the same of mine.

Beckerman’s solution is to power down the gadgets and get back to the serious business of life – such as stalking prey across the Serengeti, and having real affairs as opposed to digital ones (here’s looking at you Anthony Weiner).

Aside from the affairs, I’m not sure Beckerman is all that off in his prescription. Life is worth living because of the experiences we create. Given its brevity, there really isn’t anything to be gained by playing it safe at every turn.

And so, in honor of a man who truly lived, here’s a broad bit of encouragement: do it your way.

Ask your crush to coffee. Go for the job with the corner office. Finish the novel. Go back to school. Take the vacation you’ve been planning. Email your long-lost friend. Adopt a Pit Bull. Spring for the nice bottle of Scotch.

And, above all, never, ever drink cheap wine.

Hemingway wouldn’t have it any other way.