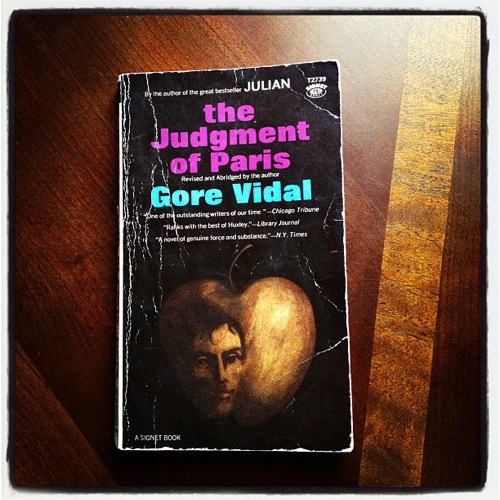 I never knew much about Gore Vidal, spare his notable row at the 1968 Democratic National Convention with William F. Buckley, Jr., where Buckley threatened to “sock [Vidal] in the goddamn face.”

Here’s a moment of silence for the death of live TV.

Naturally, when I heard that Mr. Vidal had himself gone the way of live television a few days ago, I was a bit ashamed that I had not read any of his works, although Buckley dismissed them forthrightly as “perverted, Hollywood-minded prose.” Even so, I decided to rectify the situation by making my way down to the local book seller where I found Mr. Vidal’s “The Judgment of Paris” above.

Now, the premise of the book is intriguing in its own right. Vidal sought to add a personal take on the eponymous Greek myth – as opposed to, say, the eponymous website extolling the virtues of plus-sized models. At risk of boring you with too many details, the myth finds Paris judging a celestial beauty pageant between Hera (Queen of the Gods), Athena (Goddess of Wisdom), and Aphrodite (Goddess of Love/Pleasure). Each goddess employs her wiles upon young Paris, making the contest quite fierce indeed. The ultimate winner is Aphrodite who gifts Paris (a mere mortal Trojan) the most beautiful woman in the world, Helen of Sparta. The rest, as they say, is mythology. Helen of Sparta assumes the much more well-known name, Helen of Troy. Thus, begins the Trojan War. Homer writes The Iliad and The Odyssey, and Western Civilization is born. Of course, Western Civilization is subsequently destroyed by the Cohn Brothers’ retelling of The Odyssey in O Brother, Where Art Thou? but that’s a different matter. Call me the man of constant sorrow.

Anyway, in Vidal’s novel, young Philip Warren is similarly positioned to choose between three women, each of whom in some way mirrors the virtues of the Greek goddesses above. The task proves to be quite the embarrassment of riches for so young a man. First, he is seduced by Regina the arm candy of a major politician who offers him a career in politics and the promise of power. His next encounter is with Sophia a burgeoning academic who catches Warren’s eye but never his lust, as wisdom herself has suffered at the hand of many a man throughout the ages. Finally, Warren meets Anna, yet another married woman, with whom he begins a smoldering affair.

Vidal’s resolution of the myth is much less clear than the Greeks’ myth. But the one bit of writing that struck me was the quote from Warren toward the end of the novel as he grapples with the choices he has made over the past year:

I find it demoralizing to realize that there is no such thing as future, only a long present…that all acts are essentially meaningless, except of course to one’s self. p.203.

It may seem strange but I find the obvious nihilism of Vidal’s character to be mildly comforting. To accept life’s transience is really a means by which one may simply live. And perhaps that’s Vidal’s point. Like Paris, we mortals have only this long present, so the best we can do is make a go of things incrementally. Long planning is a farce for there’s no guarantee of a tomorrow let alone tomorrows many years hence. Or as the Greek Goddess Nike might say, “just do it.”

In all, the story was an interesting spin on an ancient tale that all but solidified Vidal’s stature in my mind as a truly entertaining writer – his political views and literary predilections notwithstanding.