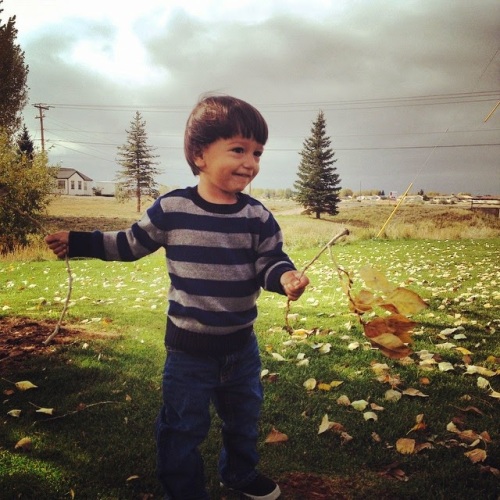 The window of my office here in Ross Hall overlooks the main quad of the University of Wyoming Campus. Outside, I can see students and faculty alike, bundled up in winter coats, gingerly making their way along the paths slick with snow. The campus is quiet and calm.

I don’t know when the seasons changed here in Wyoming. But somewhere between July and now, we passed from summer to fall, and from fall to winter – all with a graceful, imperceptible ease. Even as the seasons have passed with a steady resilience, it seems somewhere in the past eight weeks or so, my own life has transitioned from that of a part-time consultant, to a full-time professor with roster of nearly 100 students.

It’s a strange thing to see how much life can change in so small a span of time.

On the home front, our son Clark turned two on October 15th. In his two years on the Earth, he’s lived in three states and two countries. And while he won’t remember it, he has traveled more in his two years of life, than I have in the first thirty of mine. All of which reinforces the fact that we live in a very different age than the one I grew up in.

I marvel at this far more than I should. Growing up, I can remember digging holes in the yard at my Grandparents’ house, and pretending that my G.I. Joes were engaged in an intense guerrilla conflict. Clark is more interested in his iPad and Netflix options than in actually playing with the toys he has. And yet, when we take him to the park, as in the photo above, his eyes come alive with the magic of falling leaves, and small branches that are ripe for the picking. Every child has his treasures.

I wonder too about the kind of world he will inherit. Election Day is tomorrow and our Nation is on the cusp of making a significant change in direction. The Washington Post puts the Republicans chances of taking the Senate at 96%, while Rachel Maddow warns voters to ‘Be afraid. Be very afraid’ of this possibility. All of this, of course, ignores the simple reality of our system of checks and balances, and the fact that our government will remain divided regardless of which party controls Congress.

Even so, I wonder what policy changes are on the horizon and the practical implications they have for my son’s life as he continues to grow in knowledge, strength and maturity. I can live with the Government making mistakes that can effect me. That’s the cost of living and doing business in the world’s leading democracy. But when it comes to governmental mistakes that can effect my son, I find myself much less forgiving.

Still, like the seasons here, change is coming, and I hope this new generation of leaders is equal to the task. I don’t know that America can weather another election cycle of malaise. Hope seems like such a quaint notion these days. Perhaps change will be the better course.

In sum, I suppose our lives here are very much like those of Americans all over. We are in the midst of change and transition with a guarded optimism for things to come. ‘Trust but verify,’ as Reagan used to say.

I have a lot more to add about my work, book reviews, and parenting, but these will have to wait for another day. For now, I hope it’s sufficient to know that the “Pax” is back – at least once per week.