After many weeks of hemming and hawing, I finally decided to take the plunge and give commuting by bicycle a shot.

The move is purely pragmatic, so let not your hearts be troubled. I won’t be buying organic or driving a hybrid anytime soon. Neither action will save the planet anyway.

With gasoline, nigh, $4 per gallon, and but a lone pick up truck between me and the wife, cycling seemed like a reasonably inexpensive alternative form of transportation. Whether this proves true is a separate matter. More on this later.

I realize that I’m not alone in this regard. According to USA Today, bike sales are booming across the country, while even the fattest, and laziest among us succumb to the evil that is big oil.

Interestingly, this sales spike translates into only a modest increase in actual cycling. But at least we haven’t gone the way of the Brits. One in six of their poor, little prats can’t ride a bicycle at all. God bless America.

A second reason I wanted to give cycling the old college try is a matter of simple exercise. After spending the past few weeks on exams, and traveling, it’s safe to say I could stand to “get back in shape” – which is really just a polite way of saying that I need to lose some weight.

The problem is that I’m generally not fond of exercise. While I am a thumb warrior on Call of Duty (5th prestige!), my L.A. Fitness membership has gone unused since about November. Being the reasonable chap that I am, I figured if I can incorporate exercise/fitness into my routine, then I might be less inclined to hate it. Enter cycling, and my seven mile commute.

Last, I am curious to see what all the fuss is about. Tucson has dropped a considerable chunk of change on its bicycle infrastructure. But, as Andy Clarke, President of the League of American Bicyclists noted, much of this is used by lycra-clad cyclists, sporting $3,000 bikes. And poor students. Given that my own foray is somewhat by choice (like my lycra-clad friends), and somewhat of necessity (like my colleagues at the U of A), I’m curious to see how friendly Tucson, and its drivers are to cyclists who ride for commuting purposes rather than recreation.

To be sure, I realize the severe weaknesses of this plan.

For starters, this is the hottest time of the year to begin two-wheeling around town. In fact, I have it on good authority that there are coals in hell next to the Devil himself (or herself) that are cooler than Tucson is during July.

Second, I’ve never done this before. Given that local cyclists have annual “Rides of Silence” for cyclists who have been killed by cars, maybe Tucson isn’t the safest place to learn how to commute by bicycle.

Last, I’m not sure that cycling is actually a less expensive way to get around town. At least not so far.

But life is what happens while you’re doing something else, and the benefits seem to out weight the costs, so away we go.

Readers may recall that I had a lengthy dilemma in deciding whether to bike at all (see here, and here), and ultimately a separate dilemma regarding what bike to buy (see here).

I wanted something that looked vintage and minimalist, that could navigate the hilly terrain near my house, that could handle a 7+ mile commute – all on the budget of a poor graduate student.

After visits to local bike shops, and BICAS, I discovered that the nice bikes were out of my price range, while the rebuilt bikes did not meet my terrain and distance needs.

Brief aside, this is really quite a good argument for some entrepreneur to open up a used bike shop, selling refurbished, reasonably priced bikes. I’m not sure I’m that person. But for those looking to make money, the idea is yours, gratis.

In the end, I’m a bit embarrassed to say that my journey took me to Cash America’s Super Pawn Shop where a source from BICAS told me that they had road bikes for sale at half-off.

The pawn shop seemed a bit sketchy. But, being the cheap bastard that I am, even this did not subsume my desire to find a bargain.

And, sure enough, I found my bike nestled among a throng of bicycles outside the shop, all marked at half-off. For the curious, they also sell gold! 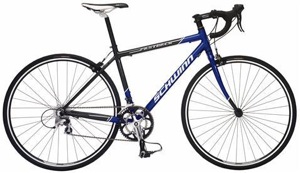 What makes me question the cost effectiveness of cycling, however, is the money I spent getting my bike road-ready.

I should say from the outset, that I am not complaining about the actual prices. I took my bike immediately from the pawn shop to There and Back Bicycles to let owner Steve Vihel take a shot at fixing it up. Steve did a great job, and charged eminently reasonable prices for all of his services. But the bike just needed lots of fixing up.

The biggest cost was an Velo Orange Saddle, made of Australian cowhide, with a chrome-plated rail finish. The saddle, its attendant care products, seat cover, seat leash, and the brown bar wrap I bought for the handlebars to match the saddle ran $125.96. 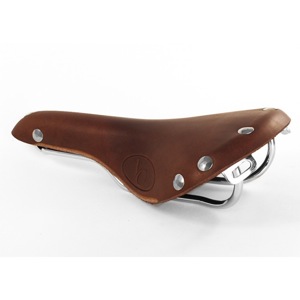 This was, absolutely, not a necessity. While I settled for a newer road bike, I still wanted something that looked somewhat like a classic, vintage bike. As you can see from the living room photo at the top, I think it turned out quite well.

The total cost for a mechanical tune-up, and bike maintenance, ended up being less than $200 – and this included the cost of a new tire, tune-up, new cables, new tubes, housing, installation, and labor. I also had two, additional final expenses for a Kryptonite Kryptolok Mini U Lock, and a 7ft Sunlite Cable. After all, it would be a shame to have my bike stolen after all of Steve’s effort.

My complaint about the cost effectiveness is really about the upfront cost that I had to spend on the bike. The initial purchase was $67, but with the saddle and maintenance factored in, the entire bike ended up costing some $366.99. In sum, my quibble is that the maintenance costs, and upgrades I made were 5x’s the price that I originally paid for the bike.

But, even this expenditure was less than what I would have paid retail for a brand new Schwinn on Amazon, and a new bike wouldn’t be nearly so cool. Although, I still need to buy a helmet, a mini air pump, extra tubes in case of a flat, and lights.

I’m still pressed to finish my exams, having left in the middle of them to return to Oklahoma and be with my sister last week. So, I hope to take the bike for a proper spin over the weekend – once I acquire a helmet, lights, etc.

Right now, I’m a little disappointed in the upfront costs associated with cycling. I was elated to spend $67 on the bike. I was less than elated at spending five times that amount to get it road-ready. Maybe I will earn back my investment over time?

Mostly, I am excited to see what it’s like to commute around Tucson. I’ve spent the past few years mocking cyclists, and the past few weeks trying to learn basic traffic rules for bikes. It’s been quite the turn around.

I assume this will be a running category of posts, so stay tuned for updates!