I just completed my first spin around Tucson on the new bike. Seeing as it’s a balmy 93 degrees today with a chance of rain, one might rightly question the wisdom of such a trip.

Interestingly, the challenging part of the route was the straightaway a long Mountain Avenue. For those not from Tucson, the street is a fairly wide boulevard with a huge bike lane on either side. It’s also incredibly flat so there was a lot of opportunity for me to build my calf and hamstring muscles, pedaling for some 3.5 miles.

Seeing as the most active thing I’ve done in months is play Call of Duty, I was naturally pretty exhausted by the time I reached the Student Union. 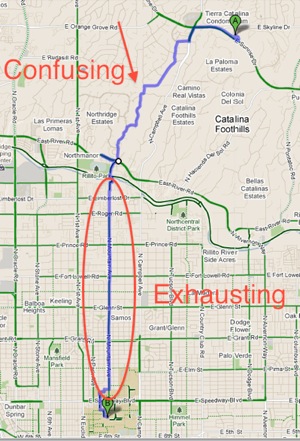 I didn’t have the courage to snap photos along the route, but I did capture a few stills of my stats once I sat down here in the Student Union.They’ll be laughable to anyone who is an experienced rider. But given that it was my first ride in Tucson, and given that I had no idea where I was going, it didn’t turn out too bad.

I’m alive at any rate. All’s well that ends well.The trip took only about twice as long as it would have by car. Door to door, the whole it took me 53 minutes, this presumably includes having to stop twice along the way to consult Google Maps.

My top speed was 19.4 miles per hours. I achieved this feat as I descended a one of the many scary hills in between Skyline and River Road. Only a couple of hills were scary. Mostly, the foothill neighborhoods were just confusing. I may need to rethink this leg of the trip. 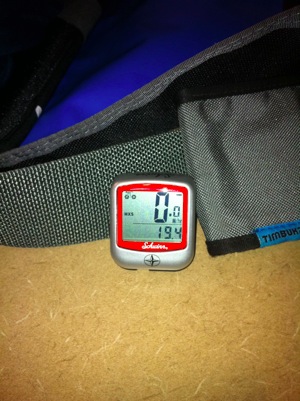 The route covered some 8.9 miles from my front door to the bike racks outside the Union. 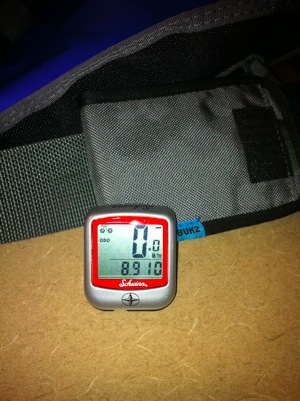 In all, not a bad afternoon. I plan to get some research done now, before making the trek north. I enjoyed the bike’s simple functionality, and the fact that I can take a very purposefully trip on it within the time frame it would normally take me otherwise.

The hard part, of course, will be the trip home, which is basically all up hill…