Boston and Blue Skies, Smiling At Me 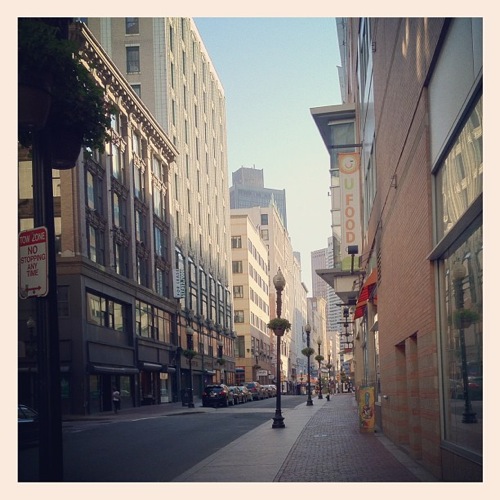 This post finds me sky high above the charming hamlet of Detroit, MI, which is yet further proof that beauty is in the eye of the beholder.

As with most Southwest Airlines flights, the aisles run six across and passengers are stuffed into their seats like fat sardines. However, one of the saving graces of this flight is Southwest’s relatively inexpensive access to the internet. Of course, at $5 per flight, the internet connection is maddeningly slow, prompting an unexpected yearning for the good old days of dial-up.

Chalk this one up to first world problems, I suppose.

My travels today ultimately take me to Boston, a city that I have not visited since July 2007. What strikes me about my return to Beantown is how much life has changed. In the city I once called home, I now know almost no one. The friends who once feted my departure are now distant ghosts themselves, having long since moved on to warmer climes.

The thought reminds me of just how transient life is in one’s twenties. At risk of extrapolating too much from my surroundings, one’s twenties are a bit like all of the passengers stuffed together in this plane. Some people make the most out of a location by finding new friends. Others hunker down and get to work. Some keep to themselves. But the lone commonality that all share is the simple lack of attachment to the particular place. The landing of a five hour flight has a funny way of dispensing with sentimentalities. And that’s how Boston was for me at age 24 – a lot of fun, but completely void of a reason to stay.

It’s true that I’m not quite thirty. But being married with a dog and a child on the way, and grad school now well behind me, I can’t help but feel a bit older than I am. To be clear, I would not reverse the clock. Living in “The Hub” made for a fun couple of years, but when I left it was more than time to put away childish things, as they say.

Still, reminiscing does make one appreciate the carefree days of youth – when my biggest concern was making weekend plans, and my most pressing dilemma was whether to visit the gym on my lunch break or not. If only I had made the visit more often…