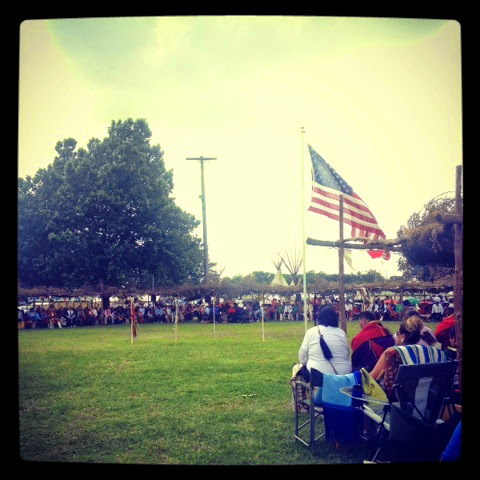 I’m writing today from steamy Carnegie Park, home of the Kiowa Gourd Clan’s annual celebration. While an American flag is prominently displayed in the middle of the arena and scores of veterans line the rows of chairs behind it, the event is decidedly not a celebration of America’s Independence from Great Britain.

Somewhere around the time that the Kiowa Indians came to call this part of Oklahoma home, the early days of July coincided with the ripening of the skunkberry, indicating that the time for holding the sun dance was near. As Kiowa warriors came to defend their territories in the infamous “Indian Wars” against the U.S. Cavalry in the late 1800s, trophies of battle were proudly displayed in the literal center of the annual ceremony. Given its origins, the event became more a celebration of tribal insurgency than a celebration of American Independence from European powers.

Yet, it is impossible to discount the appreciation for our country here marked by a plethora of red, white, and blue, along with the deep admiration expressed repeatedly for the young men from Kiowa Country who have fought with honor on distant shores. It’s also noteworthy that Native Americans have the highest record of military service per capita of any ethnic group in the United States. It is fair to say that American Indians are a rather patriotic lot all things considered.

But if there’s a conclusion to be drawn from the Kiowa Gourd Clan celebration and its implications for the nexus of culture and country, it is that America’s relationship with its tribal nations is rife with complexity. And though it may be surprising, it is exactly this complexity that makes the annual celebration here in Carnegie a quintessentially American affair.

A couple of years ago I wrote that America is like a large dysfunctional family. I think this is still mostly true. Consider the hullabaloo surrounding the Supreme Court’s recent Hobby Lobby opinion. Proponents of Obamacare and those who generally support the mass availability of contraception have bemoaned the “dangerous implications” of the Supreme Court’s “radical” decision. Meanwhile, faith-based organizations and those opposed to family planning have hailed the ruling as a profound “victory for religious freedom.”

Given our divide, it’s clear that both our internal relationship with other Americans, and America’s relationship with tribes, are complex things. And yet, like a marriage on the rocks, America somehow manages to hold it together year in and year out, providing relative stability for the world and bags of cash when good will isn’t good enough.

It’s true we can do more to cooperate and solve big problems. We can be more united and less inclined to bickering. But as a society we seem to hold our collective paradox rather well.

With our population so divided on so many issues, perhaps celebrating our cultural disconnects really is the best we can do.